On Friday nights, our parish has a 5:30 Mass in the evening and we try to make it. Tonight we Â wereÂ originallyÂ going to not go because there was a Cub Scout camp out, then Joshua talked about leaving after Mass for the camp out, then I decided to just take the little kids while Joshua and Karol went to camp.

Joshua woke up not feeling well this morning, and went to the office for a little bit. He realized he wasn’t going to make it the day and came home before lunch. He decided that he was not going to be able to do camp as well. (Something they were both looking forward to doing :() Â We all dozed away the afternoon and woke up around 415, and decided to get up and go to mass, for the Feast of All Souls.

We got out the door with time to spare and had a nice ride up 75, talking and discussing some items that were listed in the Williams-Sonoma catalogue that came in the mail. Karol also opened the gift he got from his godmother for his First Communion. It was uneventful, until we got off the freeway.

About a mile from the church, a woman pulled out from a side street, and though Joshua tried to avoid it, she hit the passenger side of the van, the passenger door taking most of the brunt of the hit. I am thankful for that, because though my arm hurts, I’m the only one who was hurt. 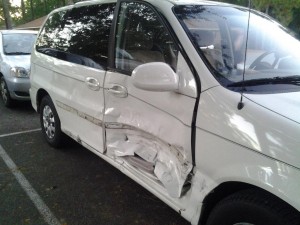