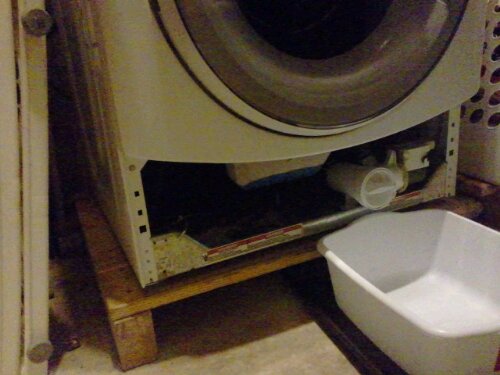 A few weeks ago, our washer started acting up. It wouldn’t complete a load of laundry, stopping at the final drain and spin cycle. I’d have to go in and restart the washer to get it to finish the cycle, and while it wasn’t the end of the world, it was a pain.

Then over the weekend, it just quit doing the drain/spin cycle all together. On a load of diapers. Great. I tried the trick for a full day, hoping it would work, but nothing. We googled the problem and found out that it could be an easy fix or a super hard fix (as in just buy a new washer fix.) Well, as we are in the middle of tearing down and rebuliding our garage, I didn’t really want to spend the money on a new washer, so I figured we’d try the first solution.

(I did have a new make and model picked out at the store, on sale for nearly half off, in the event this repair did not work.)

Joshua said he’d do it when he got home from work on Tuesday, but I really needed him to help me hang the garland I had bought for the Jesse Tree this year (and felt bad asking for two labor intensive things in one night) so I tackled it myself.

Step one involved taking off the front cover, which involved finding the correct tool to do that. I managed to find the right stuff and figured out that the parts attached to the electric screwdriver, so I was spared scraping my knuckles on the floor. Off came the front panel and there was the filter. Did you know that front loader washers have filters? Me neither, and we’ve had this washer for nearly 5 years. I’m glad that Whirlpool put it where I could easily get to it. (The new one I wanted has a flip open panel and the filter can be emptied in like 2 seconds.)

Once the panel was off, I just needed to turn the white circle thing in the picture and I was home free. It took a few seconds of struggling, but I got it loosened and off. Then I had to call for buckets because there was water gushing out, and the cookie sheet I had placed there was not going to hold the water gushing out. Once that was all situated, I washed out the filter, found probably $1.50 in change, 15 bobby pins and a few snaps from baby clothes (oh and a ton of lint, that’s what kept it from draining).

After putting things back together,  I started a load and it didn’t leak and it didn’t stop partway through. I was thrilled, so thrilled that I washed every dirty article of clothing in the house. I was walking on air too, as 1. I didn’t need to buy a new washer and 2. I could wash diapers (I was a day away from just opening the disposables I bought for vacation and using those.)

So there you go, I’m probably a bit more excited about this than I should be, but really, I fixed it, I saved us money, I save Joshua time, and I used power tools.