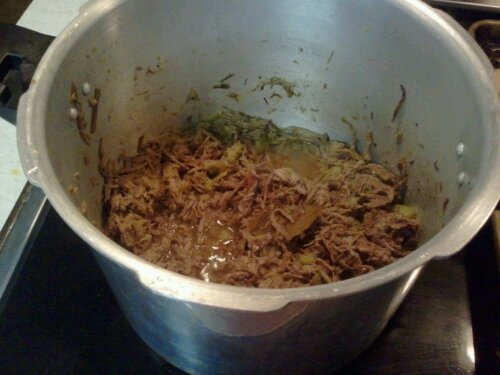 I didn’t know if it could be done, but did discover today that one can make Italian beef in the pressure cooker. My original plan was to put it in the oven and make it this afternoon, but Joshua suggested that I try it out in the pressure cooker. I wasn’t too keen on the idea as I had made pulled pork in it last weekend, but still needed to finish it off in the crock pot, to help shred it, but I decided to give it a try.

To start, I cut a four pound beef roast into six pieces, browned them in the pressure cooker (lid off, just using it like a regular pan) in a bit of olive oil. (Yes I know, cooking in OO is not great, but it was the closest bottle to my hands at that moment.) I browned the meat in batches, then when they were done, I removed the meat and added onions to the pan and sauteed them. When they were partially cooked, I added the chopped garlic and cooked them for about two minutes, then added the juice from the peperonciniÂ as well as the vinegar, and brought that to a boil.

I added the meat back to the pot, added the basil, oregano, peperoncini, salt, pepper, and bay leaf, the put the lid on the cooker and after it was brought to pressure, cooked it for 50 minutes. When the 50 minutes was up (total time from putting the lid on to the meat being done was about an hour and a half.) I cooled the pot and Joshua shredded the meat for me. I put the lid back on, not clamped on, as I just wanted the meat to stay warm while I until the bread was done cooking. 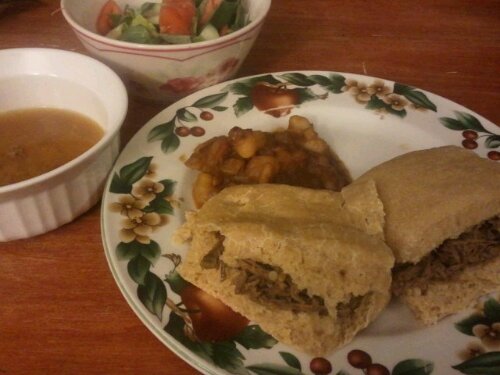 1. Heat the pressure cooker over medium heat and add the olive oil. When the olive oil is hot, add the beef to brown, working in batches.

2. Once all the beef is done, remove it from the cooker then add the onions, stirring until partially cooked, then add the garlic, cook for two minutes.

3. Add the liquid from the peperoncini as well as the vinegar to the pot and bring to a boil.

4. Once the juice and vinegar start boiling, add the spices and peperoncini, put the beef back in and give a quick stir to coat the meat, the lock on the lid.

5. Bring to pressure over medium heat and once pressure is reached, cook for 50 minutes.

6. When the time is up, use the quick release method (aka run it under cold water), remove lid, then shred the beef. Add the beef back to the pot with the cooking liquid. Serve on warm buns.

This recipe makes about 10 servings.