Today, on the 37th anniversary of his death, let us read the words of Pope Paul VI regarding welcoming the stranger: 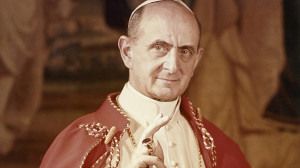 67. We cannot insist too much on the duty of giving foreigners a hospitable reception. It is a duty imposed by human solidarity and by Christian charity, and it is incumbent upon families and educational institutions in the host nations.

Young people, in particular, must be given a warm reception; more and more families and hostels must open their doors to them. This must be done, first of all, that they may be shielded from feelings of loneliness, distress and despair that would sap their strength. It is also necessary so that they may be guarded against the corrupting influence of their new surroundings, where the contrast between the dire poverty of their homeland and the lavish luxury of their present surroundings is, as it were, forced upon them. And finally, it must be done so that they may be protected from subversive notions and temptations to violence, which gain headway in their minds when they ponder their “wretched plight.” (58) In short, they should be welcomed in the spirit of brotherly love, so that the concrete example of wholesome living may give them a high opinion of authentic Christian charity and of spiritual values.