Over the weekend, we were blessed to be able to attend the Ordination to the Order of Deacons of our good friend, Rev. Mr. Stephen Smith. We’ve known him since our time in Marion, Ohio and he has become a good friend to us. We had a great weekend beginning with the ordination at the cathedral in Columbus and ending with the Holy Sacrifice of the Mass where we got to hear him preach for the first time. 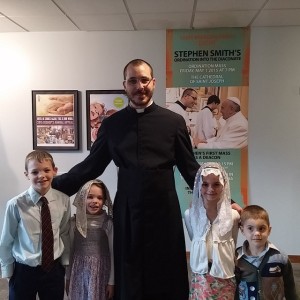 This picture was taken after Mass. I’m pretty sure Scholastica was still sleeping in Joshua’s arms, so she didn’t make the picture. I am glad I captured the banner in the background as well and as I said elsewhere: “I thought it was pretty awesome of Fr. Bob PenhallurickÂ and the Parish of St. Brendan’s to make up those banners for the ordination. Not only does it help to support seminarians on their journey to ordination, but it also helps to encourage other discerning a vocation to religious life or priesthood. (Plus, what’s a sacrament without a banner? ;))”Â