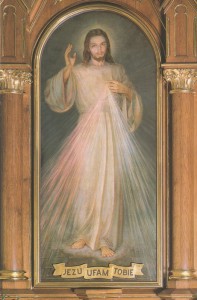 In the 1930’s, a nun named Sister Faustina Kowalska, who lived in the convent of the Sisters of Our Lady of Mercy in Warsaw, Poland, experienced daily visions of Our Lord, in which He would tell her of His unfathomable mercy, and the need for the message of His mercy to be spread throughout the entire world.
On February 22, 1931, Jesus appeared to Sr. Faustina in a stunning vision. He was walking toward her, wearing a white garment, and bore the wounds on His hands, side and feet from His Crucifixion. His right arm was raised in blessing, His left hand opening his garment to reveal two rays of light that shone from His Sacred Heart. On the left was a red ray, and on the right was a white ray.
Jesus told Sr. Faustina, “The pale ray stands for the Water which makes souls righteous. The red ray stands for the Blood which is the life of souls. These two rays issued forth from the very depths of My tender mercy when My agonized Heart was opened by a lance on the Cross. Blessed is the one who will dwell in their shelter, for the just Hand of God will not lay hold of him.” (The Diary of Saint Faustina, Divine Mercy in My Soul, #299).
He told her, “Paint an image according to the pattern you see, with the words, ‘Jesus I Trust in You’. I desire that this image be venerated first in your chapel, and [then] throughout the world.” (Diary, #47).
Jesus told Sr. Faustina that He wanted a Feast of Mercy to be established on the first Sunday after Easter. On the Feast of Mercy, Jesus desires for priests to preach about His unfathomable mercy, and then to solemnly bless the Image of Divine Mercy, displaying it for public veneration.
On Divine Mercy Sunday, April 30, 2000, Pope John Paul II canonized Sister Faustina (the first Saint to be canonized in the New Millennium) and declared that from that day forward, the first Sunday after Easter would be Divine Mercy Sunday.
This year, Pope John Paul II will be beatified on Divine Mercy Sunday — May 1, 2011 — the very feast that he established, died on, and had such a great devotion to. May he intercede on our behalf, along with Saint Faustina Kowalska of the Most Blessed Sacrament, and may we follow their great and heroic examples.

(Thanks go to Bernadette for guest writing this blog post for me!)

Today marks the sixth anniversary of the death of our beloved Pope John Paul II. In just a month we will celebrate his beatification.

I have a special place in my heart for our former Holy Father. I came back to the faith in 2000, the Jubilee year, wanting to fully live the life of a Catholic but not understanding many things the church teaches, it was kinda hard. I soon discovered the Theology of the Body and it was as if the scales fell from my eyes and I understood why Holy Mother Church, in Her wisdom held close the teachings that She did.

Pope John Paul II has such a special place in my heart that we gave our son the same name that Pope John Paul was given at birth, Karol Jozef.

The angel Gabriel was sent from God
to a town of Galilee called Nazareth,
to a virgin betrothed to a man named Joseph,
of the house of David,
and the virginâ€™s name was Mary.
And coming to her, he said, 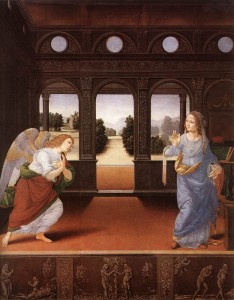 â€œHail, full of grace! The Lord is with you.â€
But she was greatly troubled at what was said
and pondered what sort of greeting this might be.
Then the angel said to her,
â€œDo not be afraid, Mary,
for you have found favor with God.
Behold, you will conceive in your womb and bear a son,
and you shall name him Jesus.
He will be great and will be called Son of the Most High,
and the Lord God will give him the throne of David his father,
and he will rule over the house of Jacob forever,
and of his Kingdom there will be no end.â€ 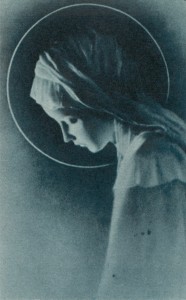 But Mary said to the angel,
â€œHow can this be,
since I have no relations with a man?â€
And the angel said to her in reply,
â€œThe Holy Spirit will come upon you,
and the power of the Most High will overshadow you.
Therefore the child to be born
will be called holy, the Son of God.
And behold, Elizabeth, your relative,
has also conceived a son in her old age,
and this is the sixth month for her who was called barren;
for nothing will be impossible for God.â€ 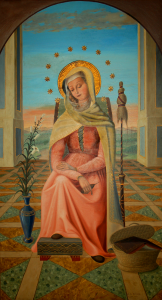 Mary said, â€œBehold, I am the handmaid of the Lord.
May it be done to me according to your word.â€
Then the angel departed from her.