Welcome to the outside, Peter! As is tradition on my little corner of the internet, I’ll share with you the story of his birth.

On June 7th, I received a phone call from a real estate agent that a couple wanted to look at our house at 9am on the 8th. I agreed to the showing then let the agent know I was 39 weeks pregnant, so there was a slight possibility that we might have to cancel if I go into labor. I didn’t think I would but you never know, right? So we spent the day getting things in shape and ready to show the house. Joshua came home from work and spent the evening mowing the lawn and we all went to bed exhausted.

I would say that labor probably started around Midnight, maybe 1230. I woke up to use the bathroom and noticed some contractions. I wasn’t trying to time them, mainly because I was in denial about being in labor, after all, we did have a showing in just a few hours. I tossed and turned for a while and went back and forth to the bathroom all while unofficially timing the contractions. They were only 10 minutes apart, so I figured I was just dealing with the “pre-labor” that my body likes to do before getting down to business a few days later.

I continued the tossing and turning and going to the bathroom for a while longer, then I just couldn’t get comfortable at all. I was willing myself to sleep in between contractions and praying the Divine Mercy chaplet during them, still denying the fact that I could be in labor. I had a showing at 9am folks, I want to sell this house!

I think it was around 230 I decided to move around a bit more, to stop the contractions. When I stood up, my water broke, except I didn’t think it was my water breaking, I just thought I’d had an accident. Then the sharp pains started. I stumbled over to Joshua, startled him awake and told him I was having some pretty hard contractions and that I just needed him to time them.

We laid in bed timing them for a good long while and they were irregular but getting closer together. I was also shaking a bit during them, having a hard time breathing through them, and sweating as each one came to an end. We still tried to deny that I was in labor (showing at 9am, showing at 9am!!). Another trip to the bathroom confirmed that my water was in fact broken (because no one has that much water in her bladder, no one) and I said to call the midwife.

After calling her, we moved to get the birth stuff set up the rest of the way. Realizing that it was nearing dawn and not sure how much longer I had, I asked Joshua to move the birth pool into the bedroom, so I could labor without the kids around when they woke up. He moved it and began to fill it up. I wasn’t in denial as much at this point and I was hoping it was real. With each labor, I have a hard time making the call to the midwife, because I’m afraid of not really being in labor, so I was hoping I’d made the right decision in calling her. (Thinking, for me, in labor is very interesting, panic about one thing, not worry about another, it’s strange.)

I got into the pool and just sat there for a bit, working through each contraction, and trying to hurry it along and then trying to slow things down, so the midwife could make it. Honestly, I knew that if I moved to my hands and knees, I’d have that baby in about two minutes, but I just couldn’t bring myself to do it yet. The midwife arrived, she checked me and said I was an inch away from having a baby. Thank goodness. I was still terrified about that part though, so I stayed put on my back. After some encouragement, I moved to my hands and knees, pushed once, pushed again and had a baby. (I may have yelled at them to get the baby out of me (like hey, pull it if you have to, I can’t do this!). Then he was here. Peter René, born at 645am.

A few of the kids were up and we sent Karol up to get the other ones so they could meet their new baby brother. The cord was cut and then Joshua took Peter out to the living room so they could look at him and the midwife and her assistant could attend to me.

So there you go, the birth of Peter René. Joshua did call the real estate agent and cancelled the showing. They had a good laugh together because I had told her I didn’t think I’d have the baby this week.

After I was cleaned up, the midwife and her assistant left and I snuggled with Peter. I would say that I was pretty much in shock that he was on the outside already. I’m very thankful that labor and delivery went as smoothly as it did. I didn’t feel like it has been 7 hours, those went by pretty quickly.

I normally pray or try to pray during contractions but this time there was something different and as we prayed a Hail Mary or the Memorare, or invoked the saints, the contractions though strong, weren’t as painful as they had been with previous children. It was awesome to know that I was wrapped in Mary’s mantle and the whole communion of saints were praying for me. 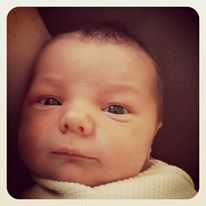