We went camping over the weekend at Mistletoe State Park near Augusta, Georgia. It was our first camping trip since our last, scorpion stinging camping trip three years ago. This trip was much, much better, much better! 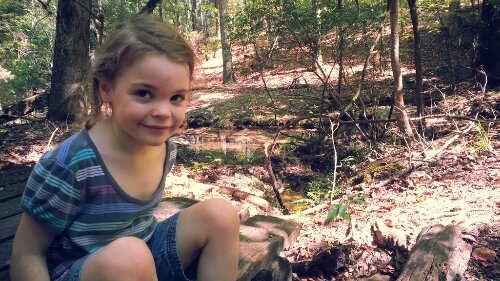 We left in the early afternoon on Friday and headed north, with a pit stop in Macon to pick up some snacks at Kroger. (Side story, I’ve had two Kroger/Payless gift cards in the van for quite a while now. I handed them to Joshua and said use them. I thought there was maybe $2-5 on the cards, but it turns out they had over $20 between the two, awesome!)Â 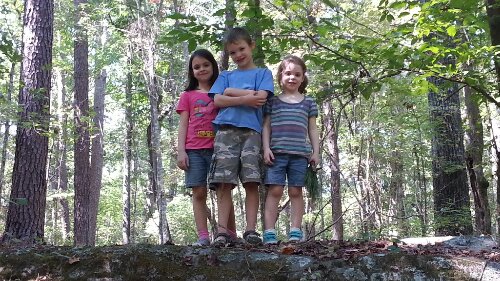 We got to the park, after getting lost a few times, and found an awesome site (tent only site 81), and set up as the sun was heading down. We started a fire and grilled some shrimp and sat around the fire for a bit, then headed to bed, with some very excited kids. The baby slept from 10-6, which was pretty awesome. 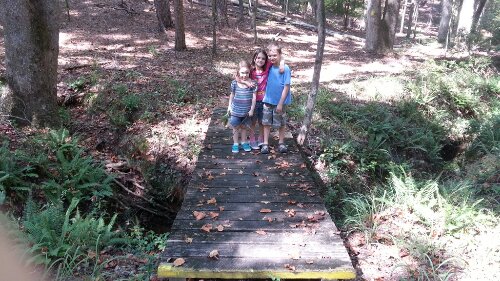 After breakfast around the fire, we headed out to actually register at the camp and then headed to the park to play, eat lunch, then head out for a hike. Joshua took the three older kids on a two mile hike while the baby, Benedict, and I headed back to the campsite after going about 1/4 of a mile with them. Scholastica slept for a while and Bene played around the campsite then built himself a little boat.

Joshua and the older kids survived the hike then we headed out to swim, then back for dinner and s’mores oh, and hot chocolate. After inducing a sugar coma, we all washed up and headed for bed, so we could be up and ready to go Mass the next day. 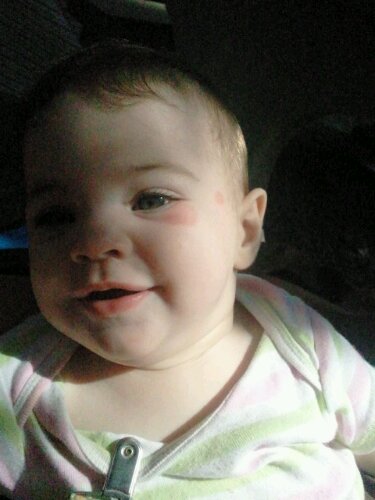 We woke up super early and headed to Mass in Augusta at Holy Trinity. What a beautiful church! For starters, it was wonderful, just wonderful to hear a real organ being played. After Mass, we took the kids around to look at the stained glass windows and discussed with what each one was and the symbolism in them. There was even a very old statue of St. Martin de Porres. No pictures were taken as our phones were charging in the van. (Sorry, Andrea)

Before heading back to break camp, we did the RiverWalk in Savannah and stopped at Dunkin’ Donuts. 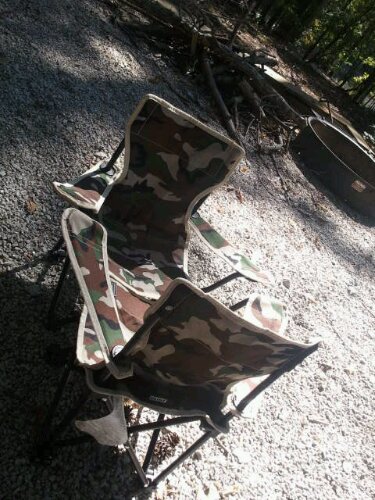 Overall, I’d say we did a pretty good job camping and I look forward to going again, hopefully before the weather gets warm again. (Not that it is that cool here, but it is cooling down.) Â It has renewed my interest in heading over to our local state park to make sure we get some hiking done during the cool season. 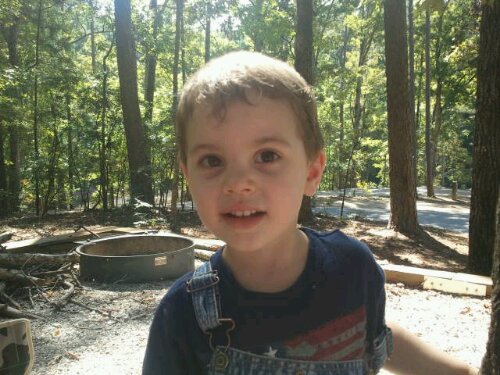 Of course, as I’m sure you readers know, a lot of the talk that happens around here (for about the last 6 months or so) is about the Republican primaries, the candidates and the issues.

Most often, this conversation consists of a mix of amazement and frustration. On one hand, it is hard to believe that the views of good people in our Catholic world can be so disparate when our Faith provides us with the most solid base of doctrine and sound guidance that exists anywhere. Why is it that every Catholic man who lives and cherishes his Faith does not agree on the best candidate for the presidency?

Besides the obvious answer – the darkness of intellect caused by Original Sin – which, in this case would also happen to be no answer, I think there are two things to keep in mind:

In the case of a primary race for Presidential candidacy backed by one party of a (sadly) two-party political machine, the issue of free agency plays an ultimate role.

Inevitably, we must make a distinction within this second point as well because there are two ways of approaching the role free agency plays in politics – the intentional and the unintentional.

The more obvious and easily seen role is free will’s unintentionality. Generally, when we act, we don’t think “I am now going to make this choice in freedom” – we just do something. In the same way, when we choose a candidate to support in a political election, we don’t choose him because we have the freedom to, we just use that freedom unintentionally. As a moral free agent, however, it is important that one generally recognize the implications of his freedom and act accordingly, so the unintentionality of free will, in the case of a strong Catholic, is guided by the general good morals he has developed in the course of his Christian formation. But, this is all obvious.

Unfortunately, it doesn’t appear to be obvious to many strong Catholics that the intentionality of free will is also important in a political race – indeed, that it is probably many degrees more important. This is because freedom of agency, in a social sense, does not just happen. It is always fraught with the peril of being overcome by the ambition of the powerful and being abandoned by the incertitude of the weak. The Church recognizes this, and has repeatedly taught in her social doctrine that governments have a responsibility, above all, to ensure the freedom of all men to act according to their consciences.

An interesting point here is that the Church leaves moral action to the agent – each man has the obligation to determine his actions according to his conscience! This does not mean that he is always correct, or that the Church is under the illusion that there is some magical social omega point at which, if enough people have real social freedom, the world will become a utopia.

The Church is not naive.

Rather, She realizes that, for any man to attain beatitude, he MUST do so through free action. It is only by free choice to accept the Law of God (through the Natural Law and, more specifically, through Revelation) that man receives sanctifying grace (whether through Sacramental means or by direct Divine offering, depending on the circumstance). Because of this, She knows that it would be fruitless for governments to compel their citizens to “act morally”. In fact, such an idea is oxymoronic – one cannot be forced to moral action. In fact, the more force that government has in our lives, the less freedom we have to choose to do good in particular circumstances! Civil liberty equals the opportunity for moral liberty!

A distinction must be made between forcing a man to do “something good” and forcing him to not hurt others. In this matter, the Church urges governments to take necessary steps. So, the dilemma we face is knowing where this distinction draws the line in politics and law. This is left up to the sphere of the laity, of course, as it is not the role of the Church to charter constitutions and write civil laws.

This elections cycle, the dilemma is compounded by the fact that we actually have a candidate running the primaries who is not woefully status-quo. (We had the same choice last election cycle for a very brief period…alas!) He is pitted against several other candidates who are woefully status-quo, as evidenced by their political records. On one hand, we have the choice of big-government Republicans who will continue creating and enabling an atmosphere of extreme power, which is most likely to become extremely corrupt. Even considering the possibility that their lip-service to the pro-life cause, cutting spending, reducing government interference and forcing a moral society is actually heartfelt (which I don’t believe for a minute), the fact that they are creating more big-government is a serious problem for freedom in society. Even if these candidates are benificent (which I mostly don’t believe for a minute), what happens when they leave office and turn us over to those more corrupt and prone to evil interference. (Consider what this has done for us already – we’ve got Roe v. Wade, Obamacare, continuous illegal and unjust wars, etc, in exchange for allowing establishment Republicans enlarge the scope of the Federal Government. Just to name a few.)

On the other hand, we have a man who stands, often alone and chastised, for getting the government out of our lives so that we have the opportunity to make decent laws at a more local level (where people are real and sane). We have a man who stands for protecting life in a way that’s much more likely to work in the short run (let states establish laws against killing babies, which the majority would do very quickly) and in the long run (by working toward an amendment to the constitution that prohibits killing anyone after conception). We have a man who wants to help protect our children by giving the right to education back to parents…who wants to help families by stopping the government from stealing our hard earned money and using it for immoral or silly purposes…who wants to make the Constitution of the United States once more the foundation of how our government operates, so that it operates to protect our freedoms rather than protecting the government and big business when they intrude and conspire against real people.

In the end, I’m sure this article, though heartfelt, will convince no-one new to actually pay attention to Ron Paul and what he really says (which, by the way, is not what the media say that he says.) I’m sure these Facemyers will continue to be labeled “Paul-bots” along with other mindless epithets, by the masses who are continually wooed by the empty promises of the establishment Republicans. Fine – do what you like, but these Catholics are firmly convinced that the best way to a moral and healthy society is not by big government, or more wars, etc. And to get there, we need the only man available who has the breadth of knowledge and wisdom to see the political landscape clearly, and the continual record of doing what is right by fighting big government so that the people may continue to live freely.

We aren’t crazy – unless by crazy you mean wanting to love God, the Church and our family as fully as possible, and being allowed to do so in real freedom – moral and civil. And as far as we see it, Dr. Ron Paul is a bright beacon of hope for freedom in a sullied landscape.