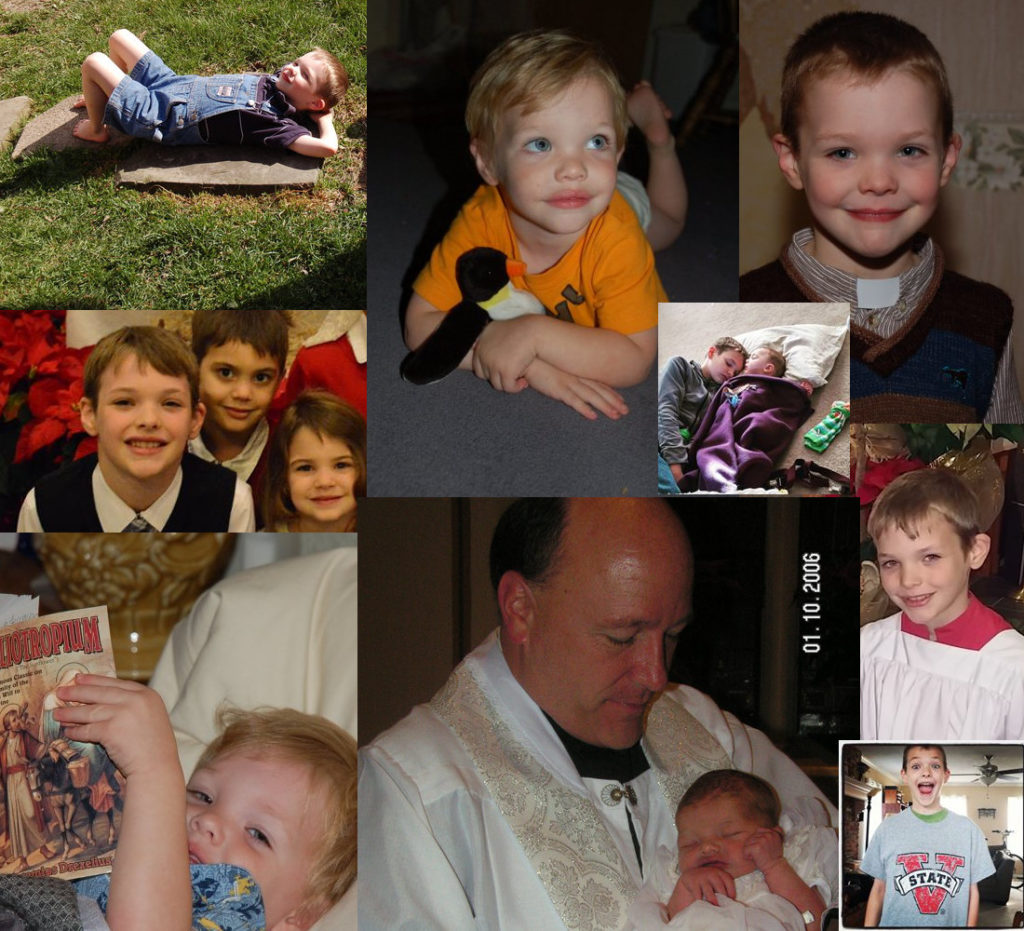 Can you believe that he is 11 already? Today he has helped make his birthday cake and is now doing what is his dream, playing unlimited video games. I’m a cool mama. He will have to practice the violin later today though, because let’s not get crazy here, he needs to prepare for classes for next week!

Speaking of violin, if you haven’t seen the video from the Winter Concert of 2016, check it out here. You should be able to open it, even if you don’t use Facebook. 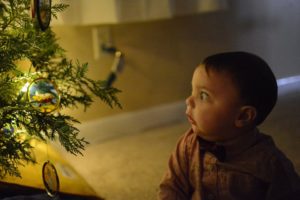 Peter is in awe of the tree that is in our living room. 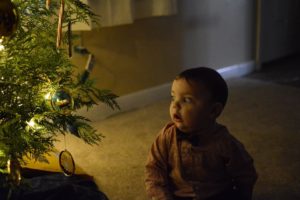 He’s been crawling his way over to it everyday to touch the lower branches. 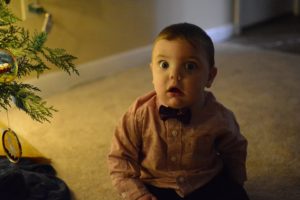 BOW TIE! How cute is this?! 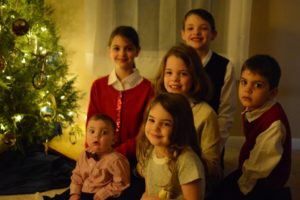 A slightly blurry shot but all the kids before leaving for Midnight Mass. 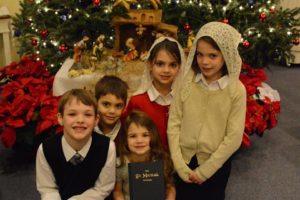 We’ve been splitting our time between two parishes lately and one of them just got the
St. Michael Hymnal last week! We took this picture for the SMH Office/Social Media person
to share with the whole world.

A few months ago, when I thought we were moving, and we packed away our copies of the hymnal,
I thought: “This year we’ll be singing out of this.”
God did answer that prayer, didn’t He? 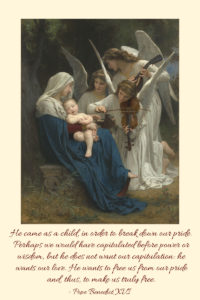 Just another Friday night at the Facemyers:

I guess we watch a lot of Peppa Pig around here.

Benedict had a concert today! He did a great job and we are all so proud of him.

Well, our closing was supposed to be on Tuesday. That didn’t happen. Sadly something happened on the buyers end and they aren’t able to buy the house.

We’ll be relisting the house soon and hopefully we’ll get another offer. I’m hoping sooner than later because my house is mostly packed up. I had left out day to day stuff in the kitchen, but it is really minimal and some of it is stuff that I plan on tossing instead of packing (eg my cracked colander), so it’s a pain to use. (I know, offer it up.) 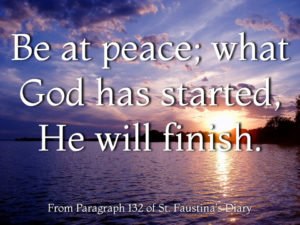 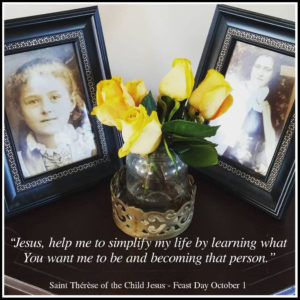 Well, we survived our first (and probably only) hurricane here. I actually think Hermine was a tropical storm when she blew through at 3am a few Friday’s ago.

I woke up and it sounded like my house was going through a car wash, with the wind and the rain hitting the side of the house. I expected little kids to join us but that didn’t happen and when I went to check on them, the sound of the storm was hardly noticeable upstairs. The kids slept through the storm and Peter only woke up to nurse then went back to sleep. I was awake for a good part of the night though, of course.

Joshua got up for work and got a text from his boss that the office didn’t have power and that the sheriff said people needed to stay off the roads until noon, or even later, so Joshua worked from home. We, thankfully, didn’t lose power or internet during the storm. (Which is strange because we lost power the week before on a Wednesday morning, while the sun was just shining away.)

That afternoon we submitted a counter offer on our house and the next morning, it was accepted. Wait, what?! True story. We’ll be heading back north, God willing, soon. Housing on that end has worked out as well so all is good and we just have to wait for the inspection and appraisal here, then closing.

I’ve spent the past few days packing up more boxes. I packed a bunch back when I found out I was pregnant with Peter because I knew I’d be sick for a good few months and then I packed up a lot more over the Christmas break, so really, it’s clothes and kitchen stuff that needs to be backed. (Oh and Joshua’s tools, but those are his domain, not mine.)

We decided to enroll the kids in the strings program again to keep them learning until we move. Last year Karol was in the Concert Strings group which requires auditioning and being accepted. I was under the impression that auditioning was an annual thing and that he would have to do it to keep his place in the group, so he did that on Wednesday. It turns out that he was accepted into the Youth Orchestra. (again what?!) He’s ten. I’m not bragging here, but I’m super impressed by his skills.

Strings started last night. Benedict is playing this year and his class is first, a half hour before the girls’ class, then Karol class begins right after the girls’ class ends. This means we are out of the house for three hours, sigh. I got the kids out and when we got to the school, it seemed like no one knew where the girls were supposed to be. Peter was having a melt down, and I was trying to keep my mind together. I was near tears. I got the girls to where they needed to be and then realized they didn’t have their music books or paper. Sigh. I hate forgetting things.

Oh and I also thought that the Youth Orchestra was on Wednesdays. Nope, Mondays. No one had eaten dinner and Peter had spit up all over my shoulder. I rallied though and kept my mind together. Note: Bring the stroller next time and not the baby carrier, it’s still to warm out for that.

Finally, I’m making these for dinner. I’ve made a variation of these recently, without the cabbage and sauerkraut (so basically burgers wrapped in bread.) Tonight I’m making the recipe for real. That is if Margaret stops sneaking sauerkraut from the jar. She’s informed me she loves it and would eat it all the time. Winning.

We’ve all been nursing a bit of a cold, including baby Peter. The rest of the kids can articulate what hurts (throat, ears, eyes, nose) but poor Peter just gets to cry and cry a lot to let us know he’s not feeling well. He’s been waking up between 330 and 430 in the morning and has been fussy until about 630 or 7. That makes for awesome morning around here, I tell you. Say a prayer for him and for his parents that this passes quickly.

It doesn’t help that when he should be napping during the day, certain children are very loud and wake him up. It’s been a rough day and I’m near tears.

I didn’t even get a chance to actually post this yesterday because the day was so rough. Last night, Peter fell asleep around 8 instead of his normal 930. He woke at 3 (ish) to eat and then went back to sleep next to me. He slept again until about 6am. Did I? Of course not. I was wide away. I prayed for a bit, then I read a bit. Wikipedia is your friend at times like this, you find a boring topic and go feel your eyes drooping. Nope, that didn’t happen either. I finally fell asleep a little after 4, but it was still far better than yesterday.

He slept the rest of morning and when he woke up, he was happy. I’d forgotten what happy Peter was like because I haven’t seen it for a week. I’m really happy that he’s back to his normal self, really.