Last night we went and looked at a house from the outside, just in case we are so blessed to be able to buy a house soon. I actually had a list of a few houses, but we only drove by two. The first was a neat little house with a big yard and a nice enclosed porch. The second house was in the Marion version of the Ghetto. I looked at the picture on line and who ever took the picture should get an award. Why? Because they made that house look very cute and cozy. When we drove by, it had a nasty old couch on the porch, which wasn’t covered enough to protect the couch. The frence out front was falling down and there was debris all over the yard. Not a good place.

After that bit of disappointment, we went to pick up our Christmas tree. It is set up in our living room, awaiting decorations, which we will do on Christmas Eve. I can’t imagine right now Karol’s excitement to have it actually decorated. Last night he kept thanking Joshua for “Christmas”. He loves the tree as it is and was so happy with it.

It is a nice little tree, I will try to get a picture of it on here soon. We did get it from the place by Joshua’s work and they are so nice and friendly. Joshua and Margaret picked it out as Karol had fallen asleep in the van and Caecilia was also asleep.

And on to sleeping. Joshua and I went to bed at a normal hour last night. 1030. We read for a little bit then prayed and fell asleep in the middle of the second decade. Caecilia decided that we weren’t going to have a restful night of sleep. She was awake every two hours and very fussy. Joshua ended up on the couch so I could nurse her and supplement with the light on. I think part of the problem was with the light off, she would fall asleep again before eating all that she needed. So she ate and ate. Between 1030 p and 730 a, she had 8 oz of formula in addition to what ever milk she got from me. Yikes, that is a lot.

At 930, she woke up and was FUSSY. A diaper change fixed that. I was fussy too, so Joshua sent me back to bed. I slept on and off until just about one, waking to nurse and that was it. That was nice. Joshua said Caecilia had a good morning, so I guess she was just being fussy for me. Now she has been sleeping soundly for two hours. 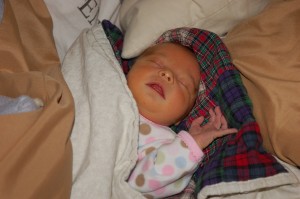 Off to clean the kitchen.